GHOSTEEN: Predictions and speculations on the upcoming Nick Cave and the Bad Seeds album 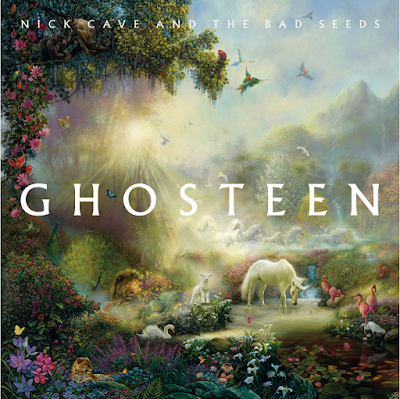 After Nick Cave revealed on his interactive site, ‘Red Hand Files’ that a new album is set to drop it is difficult not to speculate on the artistic direction that the band has taken. Although he has been transparent that new material was in the works, very little is known about it, and the release comes with little warning. What we do know is that the record will be called ‘Ghosteen’. It is a double album with at least a rough concept. As he described it, “Part 1 comprises of eight songs, Part 2 consists of two long songs, linked by a spoken word piece. The songs on the first album are the children. The songs on the second album are their parents. Ghosteen is a migrating spirit.” Cave also shared the cover of the album, which is pictured.

What clues do we have then as for what to expect from Ghosteen? It makes sense to turn first to the Bad Seeds previous album, the 2016 release, ’Skeleton Tree’. In Skeleton Tree there is a poetic stream of consciousness style that Cave seems to have perfected which is particularly apparent on the first 5 tracks. The lyrics to those songs might as well have tumbled out of nowhere, but they are never without direction, purpose and emotion. This shift perhaps began 3 years earlier though, on the album ‘Push The Sky Away’ and is most apparent on the songs ‘Waters Edge’ and the b-side ‘Lightning Bolts’. It is a style that has much in common with Patti Smith, who Cave has mentioned favorably multiple times in recent years. Another influence could have come from his dedicated interest in the unflinching and visual style of poet Fredrick Seidel. Perhaps though, Cave may have simply developed more of a free form approach that mirrors the playing of collaborator Warren Ellis. Ellis is more of a jammer than any Bad Seed in history, and as his closest collaborator, it makes sense that he would be influential. Either way it is effective and we are likely to hear an even more lyrically abstract Nick Cave on ‘Ghosteen’. As Cave’s wife, model and designer Susie Cave puts it, these are his “fever songs”.

As far as the cover goes, It seems to depict an overtly tacky version of religious paradise. Coming from Cave though, one could be forgiven for internally constructing a much more Boschian version of this scene. Perhaps by offering a visual cliche, cracks in the paradise are implied. That said, the cover is still beautiful without being ironic. Hidden in this overcrowded and naive version of heaven, there something subtley sincere and special.

The album title itself, ‘Ghosteen’ (or ghost teen), is almost certainly a reference to his son Arthur, who died tragically in 2015. I hope that Cave feels satisfied with the album as a tribute to his son, an act of healing for himself and his family, and that for the rest of us it serves as a reminder of how purposeful and important art can be in our lives when we need it most. When Cave states, “Ghosteen is a migrating spirit”, he likely means that Arthur is present in all of the songs on the ‘children’ side (or both sides). Just by calling it the ‘children’ side though implies plurality and suggests that it is not just about Arthur. It may start with his own experience but broaden into concepts of childhood and innocence that exist universaly.

As far as The Bad Seeds releasing a concept album of sorts it is not something I would have guessed at or hoped for. I am not the biggest fan of concept albums and really enjoy that Bad Seed songs are typically free standing structures. To put it bluntly I really hope that all of the songs don’t mush together too much. The structure of this double album seems interesting though and it is entirely possible that one side will be a somewhat traditional set of songs while the other will be way off in outer space. Concepts aside the approach could be quite exciting. The long form songs on the parent record may require more effort from the listener and in turn have a lot to offer if we are able to set aside our collectively shortening attention spans. For me I can’t help but wonder how these long form songs will be incorporated into the live setting. In recent years the band has been really honing their live show into a refined state and these longer, possibly stranger songs could be difficult to include. They could also help to evolve the live show and act as a positive disruption. One live outcome of course could be playing the album from start to finish in order. The Bad Seeds have so far resisted playing albums from beginning to end in the live setting and I am glad for it. I enjoy the unexpected and ever-changing quality of a live show and find it disappointing if it does not exceed the record in some ways even it falls short in others. To be married to the song order chosen on the record can be a bit diminishing to the very nature of a live show. However, there is always an exception and if Ghosteen is released as more of a singular musical piece, there may be some significance to playing the songs in order.

Finally a major contributing factor lies on the input of whatever the current lineup of Bad Seeds may be. For instance it is not out to the question that touring guitarist George Vjestica may have played guitar on the new record which could send it into very different territory than the last 2 albums. Since Mick Harvey left the band in 2009 they have recorded largely without a guitar player and the result has defined this later era of the Bad Seeds sound. Still, my perception of the Bad Seeds is that of a large cast of musicians with a diverse skillset. In principle I would rather scour Soundcloud for some unknown bedroom musician creating loops and tinkering with a Microkorg than see it become the central element in band of capable players like The Bad Seeds. The thing is though, the results have been too good to complain about. One small complaint I did have with Skeleton Tree was how low the volume was on bass and drums in the mix. In a lot of ways it was as much Warren Ellis’ record as it was Nick Cave’s and he came through brilliantly. It is just a little disappointing to see the rest of the band fade so far into the background and I hope to see them get a little more shine on Ghosteen.

At this point it should be mentioned that one of the things that makes the Bad Seeds such a great band is their tendency to land outside of your expectations and produce something that takes time to become acquainted to. I love being caught off guard by Nick Cave and the Bad Seeds and hope it happens yet again with this album. I am only indulging this largely pointless exercise because any time a new Bad Seeds album is announced it is big news to me. I can’t think of another band that has survived for so long without faltering or becoming formulaic. While I reserve the right to be critical of this or any band, book or piece of art, I am really just so excited to hear Ghosteen. I hope that it is a forward moving and multifaceted release and can't wait to listen on repeat!
Posted by Convenient Noise at 8:15 AM