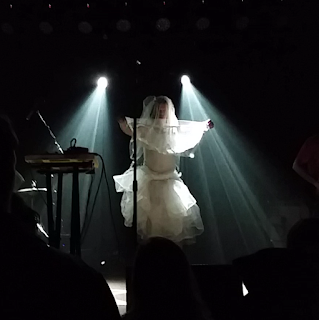 Liars frontman Angus Andrew could be described as having high art aspirations but also a natural gravitation toward pop music. In the latest album, TFCF, it is as if the two elements have broken apart into extremes to battle each other in a state of functioning discord. The bands creative choices through the years have all but guaranteed that their work will not be universally loved, but this is one of the things that I appreciate most about them. Often artistic creators will work on a project to the point where it seals off all points of entry. With Liars, give it a few listens and it is hard not to fall right in. Seeing them play live is an experience of its own with Andrew being one of the most visceral and perhaps best performers of his generation. He has an engrossing stage presence and expresses a broad range of emotions through his movements and voice. The vision that he offers is often vague and unsettling but still draws you in and conveys a sense of importance and human connection. When you go to a Liars show it is an ear-shattering good time that acts as an exorcism to all that is mundane, rigid and boring.
Posted by Convenient Noise at 2:30 PM