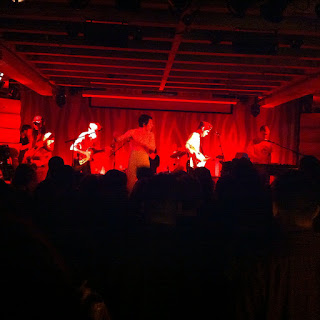 Fat White Family takes the stage unceremoniously, but even as the band mills around and soundchecks there is something about them that hints at the energy they possess. Not showmanship, but rather an underlying sense of belonging in that space. When they launch into their set singer Lias Saoudi dives into his performance headlong. Usually the act of vocalizing involves a certain level of balance where the voice hovers along and is hopefully pleasing on some level. With Saoudi, it is more about falling at top speed. He seems to be pressed against the limits of what his voice and body are capable of, and it is thrilling to see. Meanwhile, guitarist and primary musical arranger Saul Adamczewski is one of those rare musicians that can nudge a nearly unpalatable collage of sound into something fascinating without glossing it over too much.
The band is a live force that barrels along while being simultaneously pulled apart from within. It feels unhealthy and a little self indulgent, but also represents something familiar and human. It is like a chattering subconscious energy, but never seems to wallow or become overly depressing. I left feeling reconnected rather than emotionally drained or exhausted as I often am after a concert. There is a manic energy at a Fat White Family show and you can tell that the band are completely invested in taking the performance to some strange elevated place.
Posted by Convenient Noise at 8:29 PM