Dancer/Choreographer Suniti Dernovek's latest production, "A Leading Light", is a collaboration combining the movements of Allie Hankins, Dernovsek herself, and sound artist Holland Andrews. It seems a purposeful deconstruction in terms of cast and set design, resulting in focused yet surrealistic storytelling. A sense of opposition and danger is always present, but ultimately so is the strength to face it. Even at points when the performers crash to the ground or rap their knuckles on the floor, it feels as much a reaffirmation of physical self and surroundings than a representation of harm or failure. Dernovesek is an artist who possesses the ability to translate idea into movement on a relatable and universal level while retaining an awareness of the audience and respect for their power of interpretation. Throughout this process her artistic fingerprint is always present. 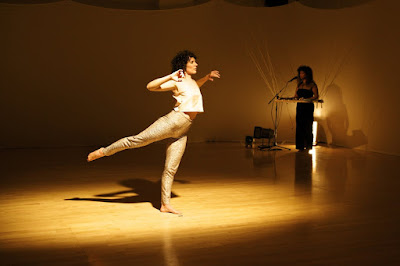 Could you describe the early stages of Leading Light? What sparked the idea for this project and how did it take shape?

In the beginning stages of making Leading Light, I was working alone in the studio with some general interests around experiencing the audience/performer relationship with more intimacy. For several years, I had been focusing on my role as a choreographer and not dancing in my larger works and in this project I wanted to include more of myself. This piece came out of a big transitional time for me. My daughter had just turned one and I was blown away by my own strength and vulnerability. Every container that I had built for myself was being pressed against and I needed to speak to these new edges and deconstruct any holding I had to a feminine ideal. I became fascinated by the creation of public and private personas, spaces and expectations. Questions arose in regards to presentation and the vulnerability in expressing what feels honest.
I asked Holland to work with me as I’ve been a big fan of her work for years and sensed that she would be the perfect fit for this project. We made a 20-minute performance as part of a residency at Studio 2, which was powerful and strong but didn’t feel complete. I wanted to keep going with it and that is when I asked Allie to get involved. Allie is a stunning performer and talented dance maker. I feel grateful to have worked with such a dream team and it really informed the work. We spent a lot of time improvising and I found myself intuitively following new paths and considering fresh possibilities. 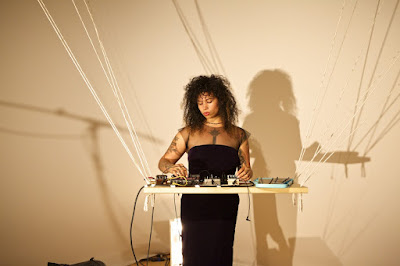 What was the collaborative dynamic like between you, Allie Hankins, and Holland Andrews? Did they bring unexpected ideas and developments?

Allie and Holland are both such incredible artists and part of my curiosity in working with them was to simply come together and see what would happen.  I allowed for space within the process to see what ideas would emerge.  Most rehearsals began with an open improvisation, which served as a general warm-up but also as a way for me to find movement or sound qualities that informed the larger context of the work. I wanted the form of this dance to be simple with two dance solos and some intersecting duets as well as space for a solo from Holland.  Within each solo, I allowed for sections of improvisation and even the moments of set choreography were a little different every night.  The three of us became very connected and I appreciated and trusted in Holland and Allies ability to make skilled choices.

You have quite a large body of work at this point. How do your past projects inform new ideas? Is there ever a sense of self competition?

Each project feels like it begins with an echo of the last project. A work doesn’t ever feel complete yet I’m thankful for the deadlines, which certainly push me into a polishing phase. Once I get near the premiere I almost always feel like there isn’t enough time to realize everything. Certainly with each work there are things that I view as not being strong or clear enough or fully actualized and unfortunately most of my shows only happen for a weekend so there isn’t the added benefit of revisiting it after an audience has informed the work. I suppose there is a bit of self-competition because with each project I’m learning and I want to carry that momentum into the next project. Yet, it’s not as much the competition but more a necessity to press against my own containers and ask questions and from that inevitably a new project emerges. 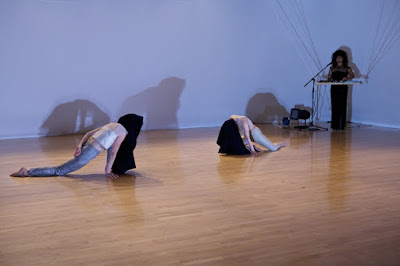 After having worked with so many talented people is it difficult not to cast past collaborators in a production that requires so few performers?

Each project has its own needs and demands and I wanted this project to feel simple and paired down. So, it wasn’t difficult to make that choice this time around. Although, it’s true I have been fortunate to work with many talented artists.

Are certain stylistic expectations placed on you from people who know your work?

Personally, this work felt different to me because it’s the first piece in quite sometime that I wasn’t collaborating with my partner David Stein. He usually brings a strong visual element to the work and this piece is quite simple. I feel lucky to be supported by people that have followed my evolution and seemed genuinely interested in what I’ve been making and how it has been changing. I guess I try not to worry about others expectations because I’m trying so hard to deconstruct my own.

Do you feel any sort of responsibility for how an audience perceives your work?

There are too many variables to take responsibility for the audience’s perception. I haven’t done a great job at inviting conversations with the audience around my work. I always intend to do talk back sessions or more work in progress showings to hear from the audience but with all of the other demands around a premiere I often miss the opportunity. 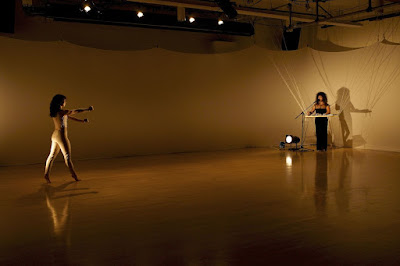 There is a fairly high degree of athleticism in your performances, but it seems to serve a purpose. Is it challenging to present skillful movement as a means of expression rather than a display of technique?

It’s interesting how we develop an aesthetic. I’ve spent a fair amount time improvising and some things have continued to be curious and intriguing. If bodies are a container of memories then moving around can certainly feel very emotional. While setting material it can be tricky to have the movement serve the greater context of the work because what felt honest in improvisation can get lost when trying to layer some sort of meaning on it. I try to create movement that can be evocative without the dancer having to feel theatrical. I’ve really appreciated working with technically trained performers and I like to push a bit into exhaustion as a tool to be surprised and genuine.

What do you have planned next? Will you take some time to regroup or are you already thinking of another project?

All photos: Meghann Gilligan
Posted by Convenient Noise at 8:56 AM